I may have a problem. I’ve become rather obsessed with the Tessuti Ruby pattern. Now, I’m not usually one of those people who make the same pattern over and over again. I mean, I have some wardrobe staples, like the Thurlow and my beloved cowl neck S1716, but those are just basics that I find useful but not interesting. And I’ve made a million Kirstens, but they’ve all been hacked or modified differently. This is the first time I’ve been just really obsessed with a pattern as it is. When I look in my closet all I want are Rubys. I have three and yet all I want to make is more Rubys. It’s kind of weirding me out.

My interest was first piqued by Ms. McCall’s version, which I later had the opportunity to try on in person so I knew what size to make (a straight 10, by the way, the bust measurement is the only thing that matters). My first Ruby was made from a Cotton+Steel rayon that is one of my favorite fabrics ever. It’s so light and flowy but drapey and just fun to wear.

After this I immediately wanted another one. I wanted to try it in a knit, so I pulled a random piece of coral mystery knit from my stash – it’s fairly heavy and drapey with a smooth hand, maybe it’s a cotton rayon mix? Anyway, the knit totally worked too, and this version is the perfect dress-up-or-down day-to-evening top.

Then I knew I had to try the dress version. I bought this length of beautiful mod print silk jersey forever ago at Michael Levine, but I didn’t realize at the time that the fabric was only 45″ wide, so I’ve spent the last like four years trying to fit various dress patterns onto it and failing. But apparently it was just waiting for the Ruby, because I had literally exactly enough fabric to fit the dress version (just a half inch shorter than drafted) and the bias strips, and had only little scraps remaining. Perfect!

So, let me talk about the neckline and armhole finishes (because, honestly, that’s by far most of the sewing on this project). The pattern calls for cutting three 2-inch wide self bias strips that are 27 inches long. I cut excess off all my strips, and in fact, on the silk jersey dress version, my bias strips were only about 22-23 inches long due to fabric shortage and that was still long enough (barely). The instructions have you fold the strips lengthwise, sew the strips to the right side of the neck/arm edge, then fold the strips around the seam allowances and stitch in the ditch to secure. This is what I did on the first version, and because the rayon pressed so well, it worked out perfectly. On the knit version I still cut two inch wide strips, on the cross grain not the bias because knit, but once I sewed them to the edges I just left them. I topstitched to secure the seam allowances down, t-shirt style. As a knit finish this works well, but if I do it again I’d make the strips a little narrower because the wider strip on the neck is a little wavy on the folded edge. For the silk jersey I did cut bias strips because it wasn’t that stretchy, and I used the fold-over technique. I accidentally took too wide a seam allowance on the neck, though, and didn’t have enough width left to fold over and catch in the ditch, so I hand stitched the neckline binding on the inside. The armholes I did leave enough to fold over and stitch in the ditch.

The pattern includes pieces shaped like neck/armhole facings that you’re supposed to cut out of something called Vilene, which I’ve gathered from Burda is a European interfacing of some kind that we can’t get in the US, and sew it onto the arm and neckline edges before sewing on the binding. As far as I can tell, this serves two purposes: to prevent the curved edges from stretching out as you sew, and to make the raw edges a bit stiffer to make folding the binding around them easier. Lacking Vilene, and also because I really wanted to keep this a three-piece pattern, I didn’t use the interfacing pattern pieces at all. On the rayon version I staystitched the curved edges to prevent stretching, and I didn’t have a problem folding over the binding because the fabric pressed so well. The knit top was not reinforced at all, and it’s pretty much fine with just the binding. The armholes do grow a bit throughout the day, but not enough to be a problem. On the silk jersey version, I actually zigzagged 1/4 inch clear elastic onto the seam allowances of the armholes to help support the weight of the dress and to give a hard edge to fold the binding around, and that worked great. 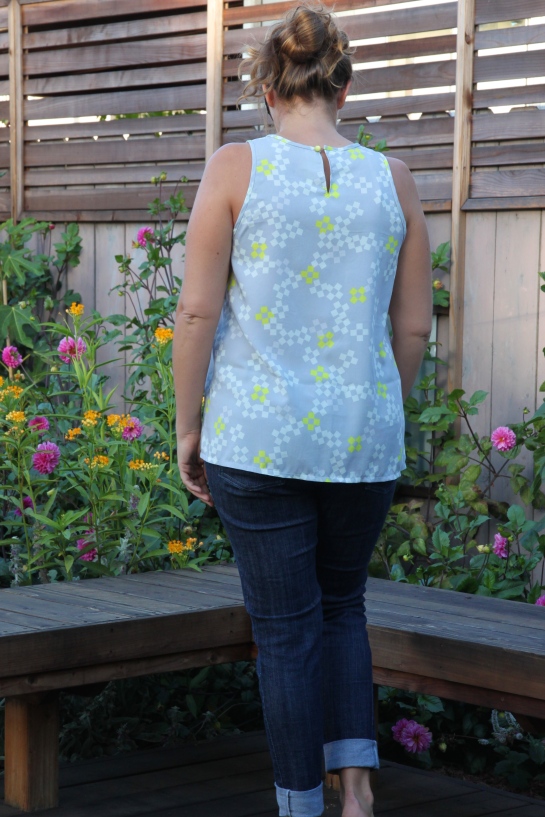 On all of the versions I did interface the back cutout facing as instructed, but I just serged the edge of the facing rather than folding it under. I also topstitched around the slit on all the versions to keep it secure. I should have sewn a little further from the cut line on the first version, though, because after the first wash a little section of the seam came apart and is fraying. I coated it in fray-check and we’ll see how it wears. The rayon version has a functional button and thread loop, but the two knit versions fit over my head without undoing the button, so I just sewed the top edges together on those and added a decorative button.

So, yeah, I really love this pattern. It’s pretty much the perfect summer pattern, and I love that it works in a woven and a knit just as well. I may well try to make a fourth version before the end of summer here (which, since our coastal weather means summer just started about three weeks ago and temps will be in the 80s for at least another month, is not such a stretch). I do think the top pattern is a little more versatile than the dress – I love the swingy mod mini dress, but I probably only need one. But I think the top can be very distinct depending on the fabric choice, and I feel like I can safely have several in my wardrobe. What more can I say? Make a Ruby!