So, I guess it’s May. (How did that happen?) I know because people are excited about Me-Made-May – which, don’t get me wrong, is totally awesome. I love the idea, I loved participating in it, and I want people to be excited by it and learn from the experience for years to come, like I did. I will say though, that because mine has become basically a me-made-lifestyle, that the only thing a MMM commitment would add to my month is pressure to take photos (which I hate) or to finally upgrade my phone so I can join instagram (which I would love to do, but I can’t bear to lose my beloved original iOS design – I will cling desperately to my yellow notepad notes and 3D text bubbles and original google maps for as long as my iPhone 4 is functional). So let me just say that I will be participating in Me-Made-May like I do basically every month (after its last purge, my closet has only a handful of RTW items left in it anyway), but what I will try to do this month is MAKE. For ME.

Andrea got to it before me, but I was thinking about making a similar pledge before I read her post. I used to be inspired by contests and occasions and other “required” sewing, but now I just really want to make whatever I want, whenever I want. Which is why I made this top. (Okay, I made it back in March, but it represents the spirit of what I want to do more of in the future.) Totally inexplicably I have wanted to get back to working with wovens lately (I know, who are you and what have you done with me?), so I grabbed this lovely Joel Dewberry rayon that I ordered on a whim a few months ago and made a top.

The pattern is McCall’s 7094, which I bought for 99 cents or whatever a while ago, when the first tiny voices whispering “you might want to sew something other than jersey sometime” started to appear in my head. I’ve become quite bored with the knit pattern catalogues of the Big 5, but their woven patterns are basically novel to me, probably because I’ve totally ignored them for years. I realized that this was potentially one of their giant tent shirt patterns, but flowy tunics are everywhere right now, and I reasoned that the rayon had the right drape and weight to tame the tent tendencies. I did make a straight size small, when I would more usually make a small on top grading to a medium in the waist/hip, because obviously this would be more than big enough. And I think tent was avoided, for the most part.

I will admit this was fiddly to construct in the collar area, but that’s probably because after so long making easy stretchy things I have NO patience for the slightest challenging construction detail. I did not slipstitch most of the collar down on the inside – for the most part I secured it with stitching in the ditch, with a little hand stitching at the corners to catch what I missed.

I was able to figure out a way to totally clean line the yokes with no hand stitching whatsoever, though! I will go through that now for those that have this pattern and want to try it (I think the technique would apply to the sleeveless version only), but it probably won’t make sense to anyone else, sorry. So I started by sewing the side seams of the body pieces and finishing their half armscyes with bias strips. Then for the yoke, I stitched the armholes of the yoke first, wrong sides together, then trimmed, turned, and understitched. Then I turned the yoke inside out again and placed the gathered back piece inside the yoke, lining up the top edge of the back with the bottom edges of the yoke, adjusted the gathers to fit exactly, and stitched. Trimmed corners and turned right side out again, voila, enclosed back yoke seam merged with finished armscye seam. For the front seams, I made the pleats in the front pieces, then wrapped the yoke around the front piece with the stitched armhole seam butted up to the finished bottom armhole and lining up the top/bottom edges again. Stitched that and turned and hooray, totally enclosed yoke with no hand stitching! Mind you, this only works because you add the collar later, so the collar is still open for you to turn the yokes out through. I borrowed this technique from a couple Burda patterns I’d seen, and it was also inspired by the way you sew the shoulder seams of any cut-on cowl top ever (and I’ve made a lot of those). The instructions of course would have you fold under the SA and hand stitch all the yoke linings – no thank you. I’ve heard the instructions in this pattern are actually rife with real errors, not just dumb techniques like usual, but the sleeveless version’s steps were mistake-free (if not dumb technique free).

I did find that the armholes were a smidge too high, which is an issue I often have. I should always preemptively make a Low Armpit Adjustment (I wish that was a real thing), but instead, when I tried it on after sewing the yoke but before adding the collar, I went back in and re-sewed the back yoke seam with a smaller seam allowance to give me a little more room.

The only other odd thing about the pattern is the pleats under the placket – it’s not a true box pleat but rather two little pleats that try as I might I cannot get to lay right. That whole area at the bottom of the collar is kind of a mess, because I’m really bad with clipping corners and getting right angles to actually be right angles, but what’r’ya gonna do? I can’t decide if the placket would be easier/look better without the pleats under it or not… 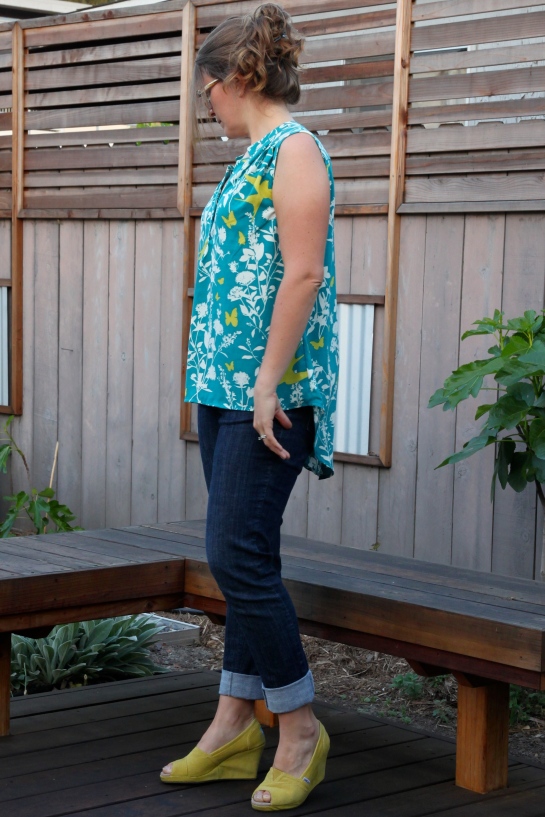 I am also a little undecided if I like the mullet back of this pattern. I like the idea, but I think I generally go for a more subtle hi-lo hem. This thing is like a butt cape. I’m tempted to cut off most of it and re-hem it to a mere inch or three curve, but I do feel like I’m seeing this long butt tunic thing everywhere, and also I’m lazy. Thoughts? Butt capes good or bad?

All in all I’m pretty pleased with this top, though. I’ve avoided rayon for a long time because I hate rayon knits so much (pilling!), but rayon challis is really nice. I washed and dried it in the machine as usual (though now that it’s sewn I will try to pull it out of the dryer early so it doesn’t shrink any more, just in case). It’s soft and pretty and nice to wear, and now I’ll be looking for it when I’m fabric shopping… great, a new fabric to buy. But hey, whatever gets the mojo going, right? Happy May!