I still have a couple more things I made for my New York trip to share, plus my fabric haul, of course, but first I wanted to pop this up here because I like it so much: the Thread Theory Camas Blouse. And it’s basically the opposite of black and white.

I downloaded the Camas pattern very soon after it was released, because I thought it would fill the wardrobe niche of Dressy T-shirt. I like the idea of button down blouses, but would always rather be wearing jersey, so this is my perfect solution. I ordered this cherry blossom print jersey from Girl Charlee, and immediately discovered that the coral orange centers of the flowers were a spot-on match to the coral stripe merino left over from my Lekala top. I adore color blocking, but it’s so rare that I find fabrics that match, so I had to go for it.

Despite having a button band, which are usually a huge hassle, this top went together in just a few hours today. I wanted it, I had it. I love when that happens. I did deviate from the instructions slightly and I attached the inner and outer bands together before sewing them onto the blouse, because I thought that would be easier and less likely to cause brain explosion (curved bands are one of those things I find very confusing to attach correctly). The band went on in one try, thankfully, even if it isn’t a totally consistent width all the way around, and the inner band peeks out a little (but I’ll blame that on my malfunctioning iron – lately it had some kind of aneurysm and is now super-heating itself after being on for just a few minutes, which means I have to iron quickly or risk scorching my fabric). I credit the pattern for having you interface both the inner and outer band. Most knit patterns with button bands that I’ve seen only have you interface the inner band, which makes everything go wonky when you try to topstitch. These bands were very well behaved. And as many have noted, you don’t need the button bands to actually be functional because the neck is so big, so rather than muck about with buttonholes, I marked where the buttons should go and stitched the bands together at each mark with a short wide zigzag before just sewing the buttons on top. I had to resort to buying plain white buttons at Michael’s, of all places, because it is literally the only store that sells buttons (but only, like, 5 kinds of buttons) that isn’t a 30 minute drive away, sigh (and keep in mind that I live in a population center of around 150,000), but I’m holding out for the possibility of finding some awesome coral buttons next time I make the trek to JoAnn.

Size-wise, I followed the measurement chart exactly and cut a 10 in shoulders/bust grading to a 12 waist/hips. I probably could have cut a straight 10, but just because of the billowy back. When I pull the front flat, the side seams hit right at my sides, so all the ease is in the back piece. Because my fabric is cotton and on the stiffer side, it tends to tent out at the sides, but if I were to make this in a drapey jersey it would fall beautifully, I bet. If I did make this again in another cotton knit, I would consider omitting the back gathers. And, oh, I think I will make this again. 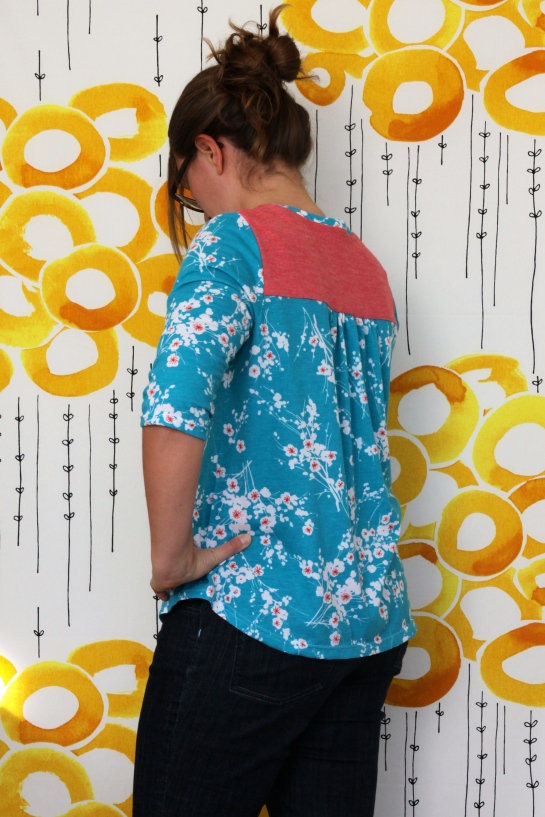 I have to say, I’m really loving Thread Theory as a company. I made The Man a Newcastle Cardigan for our trip (more on Man Sewing soon) and on both patterns everything is just drafted so nicely, the pattern markings are clear, the instructions are comprehensive and nicely formatted, and the design aesthetic is just clean and lovely. I really hope they release some more women’s patterns, because let’s face it, I will always be a selfish sewist. Speaking of which, I am entering this make into the Indiesew Spring Selfish Sewing Week Challenge. I stumbled on Indiesew just recently – they’re primarily a retailer of independent patterns, many of which are from designers I had never encountered before, but it looks like they’re trying to create a sort of community as well, with mini pattern reviews and member projects featured on the pattern pages. Check it out, and if you’re a member and so inclined, your vote in the challenge would be appreciated! (I am straight-up coveting that lemon merengue leather hide.) Here’s to the start of Spring!