So, yeah, I know I’m a little late for Halloween jokes. And that’s not the only thing I’ve waited too long for… Sorry for dropping off the planet for a while. Suffice it to say, unpacking turns out to take significantly longer than packing. Not to mention assembling two full carloads of flat-pack Ikea furniture. And painting. Man. Painting. is. terrible.

But! The house is “done”! I put “done” in quotation marks because, as everyone who’s ever bought a house has told me, it is never, ever really done. But! Our house is done enough to have had a housewarming party, which in my book makes it done enough for now. Most everything’s put away, there are no boxes left lying around, and I’ve gone back to work, so let’s just call it good. And now I’m really optimistic that I can get back to my regular schedule of, ya’ know, sewing something every once in a while.

But for now, I thought I’d do a recap of the meager sewing I’ve done in the last month… all in my new sewing room(!)

The weeks leading up to my birthday last month were incredibly busy, but the Crazy Sewing Monster in me absolutely demanded I make a new dress for my birthday dinner. Left with just 2 hours before dinner on the day, I pulled out trusty 2-pattern-piece Vogue 1250 and some ITY from the Loft and I just. did it. That pattern is truly miraculous. I literally cut it and sewed it in an hour and 20 minutes. No joke. My last version is a little, uh, clingy, so this time I gave myself a smidge more ease along the back skirt seam and it was perfect. Here is a not-great picture in front of my new front door (it is a totally awesome 15 panel solid wood door, which might actually be original to the house – I love it, but it’s not light enough in the morning in the entryway for good pictures): 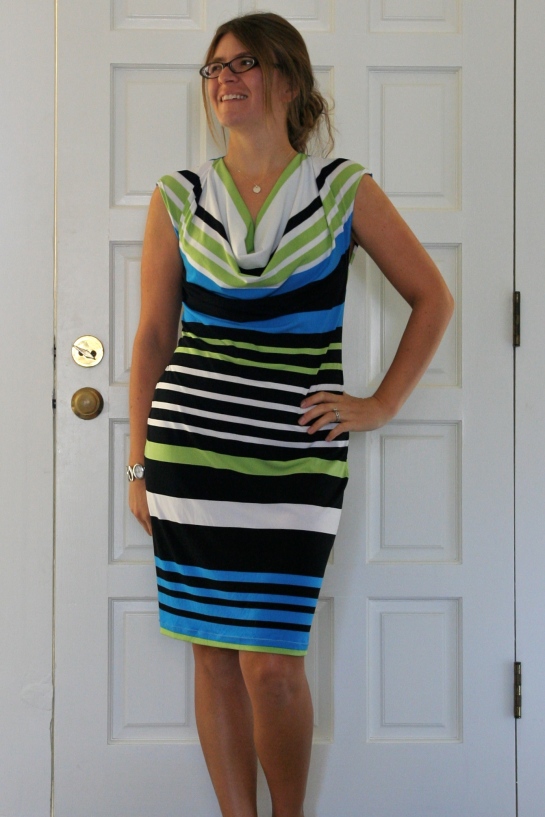 The second thing I made in my sewing room (I’m just gonna keep saying it cause it sounds so good) was another down-to-the-wire effort. At 11pm the night before our housewarming party I whipped out a cushion cover for our new bench (it’s an Ikea Expedit 1×2 shelf with casters). For the cushion, I cut a piece of fabric (it’s a cool home dec print from fabric.com – home dec fabrics have such great prints! Why can’t garment fabrics be that cool?) that was as long as the piece of foam and twice as wide plus a bit. Basically, I folded it long-ways right sides together, sewed the back (I inserted a zipper) and the sides, then squared up the corners just like my messenger bag. I wanted to take pictures for a tutorial, but, well, it was midnight and it just wasn’t gonna happen. I’m happy to provide more details if folks are interested. Anyway, the Orange Terror sure likes it: 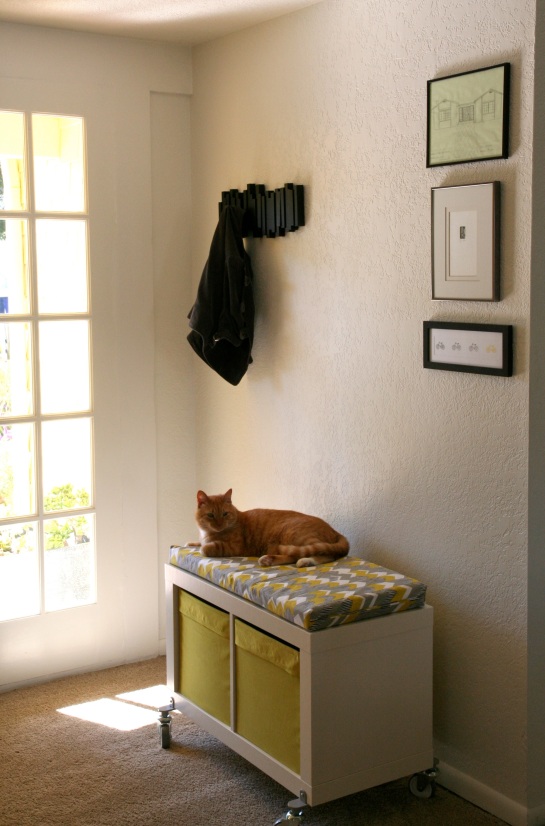 After that there was no sewing for a while, until I was invited to a baby shower rather last minute, and I realized that I kind of had to make a baby-something in one evening with supplies I had in the house, since I would have no time before the shower to actually go to a store that sold baby-somethings. To the internet I went! And found this pattern/tute for cute knit baby hats. So I made a couple: 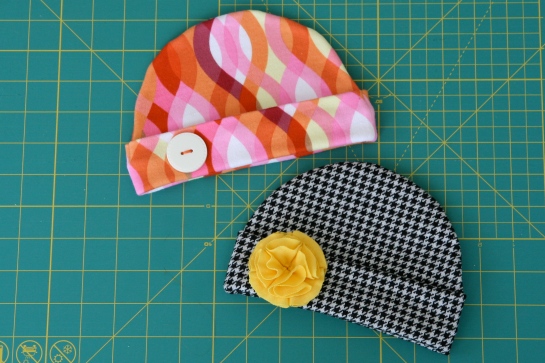 And that brings me to my most recent last minute make (are you sensing a theme here? I’ve said it before, I work best with a deadline!) This one wasn’t really urgent, it’d just been so long since I’d made an easy everyday garment, I just wanted one. This has gotta be the fastest fabric-purchase-to-garment conversion I’ve ever done. I bought the fabric at Jo Ann (I know, I try to avoid buying their fabric, but once in a blue moon something acceptable pops up) last Sunday during their crazy sale, and I cut and sewed the shirt on Tuesday evening (and wore it Wednesday). The pattern is Simplicity 1716, which is my holy grail of cowl neck tops. I love this pattern. It’s such a quick sew, the cowl is just the right depth, and the fit is great right out of the envelope. I don’t imagine this one will be my last. (Here is my first one, with more pattern details.) This time I cut the second-longest length and did the ruching detail on the sides. What can I say, I like long shirts.

I was trying out another photo location here – this is a redwood screen we put up on the side of our back porch for privacy. I like it as a background, but the morning light was even worse here! This picture was manipulated a lot to get me even visible. Ah well, it’ll probably take me a few more projects to find a good photo spot…

Just one final piece of sewing news: a friend who deals antiques brought me a box she found at an estate sale recently – a box full of random sewing goodies! Granted, about 70% of the box was ugly trims, but there was some good stuff too. Here’s my haul: a big box of zippers, lots of snaps and hooks (most of them antique – love those labels!), bias and hem tapes, a grommet setter and bias tape maker, horsehair braid, and some cool pre-cut waistband interfacing (self belts, much?). Oh, and it looks like another household member is interested in learning about “Stitching the Knits”… 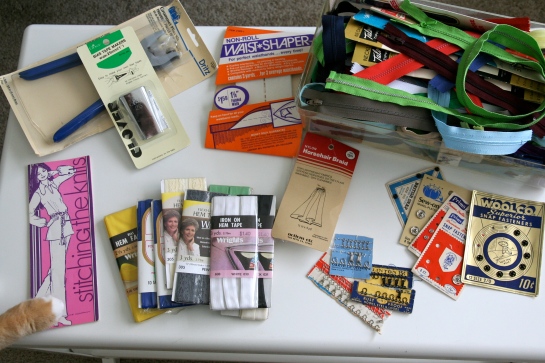 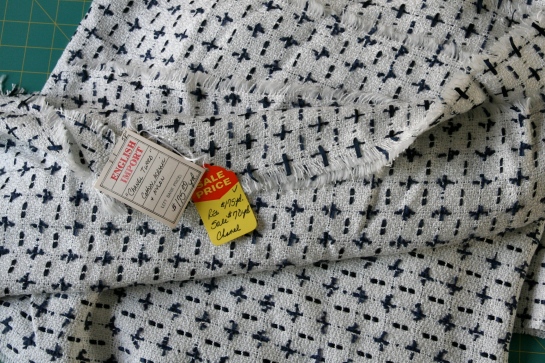 …and from the same estate, about 2 yards of a beautiful white and blue loose weave fabric with a label reading “Chanel Tweed”. Originally $175 a yard! My friend said she maybe paid $5 for everything. My first vintage fabric find! Now what should I do with it? Before you suggest the obvious – a Chanel jacket – know that I am utterly not the sort of person who would make and/or wear one. I’m nothing but impressed with those that take the time to create a beautiful couture jacket – it’s just not my thing. As you can probably tell by …basically everything I’ve ever posted. Plus when would I wear such a jacket? But – perhaps some other kind of coat? A sheath dress? Just leave the fabric in my closet and pet it every once in a while? Help!

So that’s what I’ve been up to. Not a lot to show for two months, but there it is. I feel like I’ve missed a whole season, and now I’m way behind on fall-appropriate sewing. Luckily I have a lot of stuff I made last year to wear now that the weather’s changing (yes, here it’s basically summer until November. Not complaining). But I want shiny new things! So I’d better get moving (figuratively, of course. I don’t want to literally move again for a very, very long time). I just dug out the doubleknit Cordova jacket I started last winter (by “started”, I mean cut out one piece), and finished cutting it out finally. Also on the “urgent” list: pants. Because I currently own one single pair of long pants that fits. I had the shorts bug this summer, hopefully that will translate into the pants bug… Now to get sewing!

For realsies this time.