So I made my Halloween costume this year, after the last couple years of meaning to and not getting around to it. Cool, right? Except I’m just realising that this may actually be a problem. Because what did I make? Was it a fantastical mythical being costume? A fancy period dress? A complicated conceptual design that could not be found elsewhere? Nope. I made a plaid shirt. Just a plain plaid button-down shirt that I could have bought anywhere. But still… I’m glad I did. Hey, it means all those other bespectacled brunettes out there who went as Liz Lemon this year didn’t have the same shirt as me, right?

Maybe next year I’ll go as that pernicious insect the Sewing Bug. Cause once it gets you…

Let’s start with the shirt. This is Simplicity 2447, a nice basic princess seam button down with a front bias panel.

This is a nice pattern, and was not too hard as far as shirts go. (Cast sewing is getting way easier… all the same I hope it doesn’t have to continue much longer!) It isn’t a particularly fitted shirt, so with the extra ease listed on the pattern pieces in mind, I made a straight size 10 rather than grading up to a 12 below the bust, and I got a good fit. The shirt is a hair short for my taste, and the sleeves are a little long, but I was pleased with the fit in the shoulders/back, which can sometimes be an issue for me.

The only pattern modification I made (other than shaving just a little off the princess curve as an SBA) was to add a placket to the sleeve, since the pattern just had a button cuff but no placket. I used the magic placket tutorial again (first used on my corduroy jacket), and made a 5 inch long by 3/4 inch wide placket on each sleeve between the circle markings on the pattern indicating where the cuff opening would be. I did not modify the sleeve or cuff otherwise, and I kept the two pleats indicated in the pattern. I cut my placket strips on the bias because I wanted the diagonal plaid, but I should have interfaced the pieces because the bias made the plackets stretch out a bit and not lay flat.

This shirt has been in the works for a couple seasons now, since I bought the shirting fabric on super clearance from Fabric.com more than two years ago. I’m glad the shirt finally came to be, and there’s nothing really wrong with it, except, well, I just don’t really think I’m a button-down shirt person. I just don’t find them flattering on me, I guess. Would it help if this pattern had more waist definition? Maybe. But overall I’m just not sure how much wear it’s gonna get. For a Halloween costume though, it’s terrific!

On to that then: I’ve always been a big fan of 30 Rock, and (like many women I think) I’ve always thought of myself as a Liz Lemon… mostly because I love to eat and I embarrass myself on a regular basis in front of my co-workers/passers-by. I’m also not a huge fan of dressing up for Halloween, so a cop-outish costume that involved me just wearing a slightly different shirt and doing nothing else appealed to me greatly. I knew I’d have to give some other clues as to who I was, though, so using this still as inspiration I decided to make myself a TGS hoodie too.

Thankfully I have not reached the point in sewing madness that I needed to actually construct a hoodie from scratch, so I just bought a cheap sweatshirt at Target and some iron-on printer transfer paper and appliqued some logos on it (I found the large logo for the back online, but I made the front TGS logo in a paint-like program, then cut the letter circles out separately before ironing them in place together). 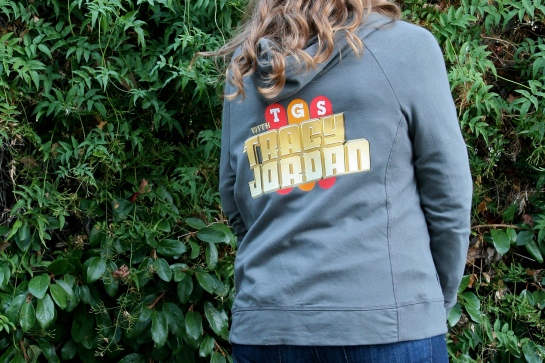 And here is the whole costume together, with (what I hope is) a Liz-Lemony face. Actually, at the Halloween party I attended on Saturday, I was pleased that a lot of people came up to me and said “Liz Lemon!” There’s no better feeling than when someone gets your costume without any prompting.

In other costumey news, I also made (in a crafty sense, not a sewing sense) my husband’s costume. The loose theme of the Halloween party was “board games”, so after some quick googling we decided that an easy and fun costume would be the dude from the game Operation:

I traced off the shapes of the plastic pieces (by zooming in on pictures I found online and using my computer monitor as a light box), then transferred the tracings to white foam sheets and cut out the shapes. I then cut red felt to the shapes of the openings in the game board for each piece, and used sticky-back velcro to attach the foam pieces to the felt. I thread tacked the felt shapes to a random yellow shirt and (incredibly wrinkled, wow) shorts, with the wrench safety pinned to the sock. Quick and crafty costume!

So those were my Halloween escapades for the year. (Well, I also helped a friend make dragon wings for her costume, but unfortunately we didn’t manage to get any good pictures of them.) Happily we’ll both be getting to wear these costumes again on Wednesday for actual Halloween, so at least we’ll be getting (or close to) my effort’s worth out of them. And actually I can see myself wearing the TGS sweatshirt all winter – it’s very nice and cozy for a cheap Target hoodie.

So Happy Halloween to those who celebrate it! I for one am hoping to have a very happy day on Wednesday, since I have an appointment with the doctor and am crossing all the fingers I can cross that he’ll tell me my wrist is healed…