I had no plans to make this dress last week. My reason to sew something varies wildly project to project, week to week, day to day – sometimes I feel like I should sew up stash, sometimes I’m just randomly excited about a pattern or fabric and I must. make it. now., sometimes I have a deadline of some kind. And obviously, I work fastest when there’s more than one reason to get it done. Such was the case with this dress. I really enjoy the contests over at Pattern Review, mostly because they focus my random energy into making something specific, but are loose enough that I can still get creative (I imagine that’s the reason they have them, so well done PR). I wanted to enter the “Best of” Patterns contest, but when I took a look through the lists of possible patterns I realised that I had made and reviewed all the patterns I already owned (I mean, the point is that they’re good patterns, after all), so I started brainstorming which of the remaining patterns I could buy and make up from stash fabric in less than a week (and that I’d want to wear, too!) and I came up with Vogue 1226, a simple but cute sack-dress-with-sash. I had in the very bottom of the Stash Monster’s belly an awesome Italian print cotton and matching solid contrast fabric from my first visit to Mood LA two and some change years ago, when I first thought that maybe I could start sewing clothes. It’s lovely fabric, but I bought it for McCall’s 5654, a sort of comically bad pattern that I bought basically because I liked the fabric in the envelope photo, without thinking about what an epic mistake the style would be for my shape (or anyone’s shape, really – this pattern has terrible reviews). So the fabric languished in the pile, waiting for the right pattern. That’s two motivations, and then the third popped up in the form of a Girls Night Out with some work friends last night, and the triple-threat of reasons to sew resulted in my completing this dress in two days! 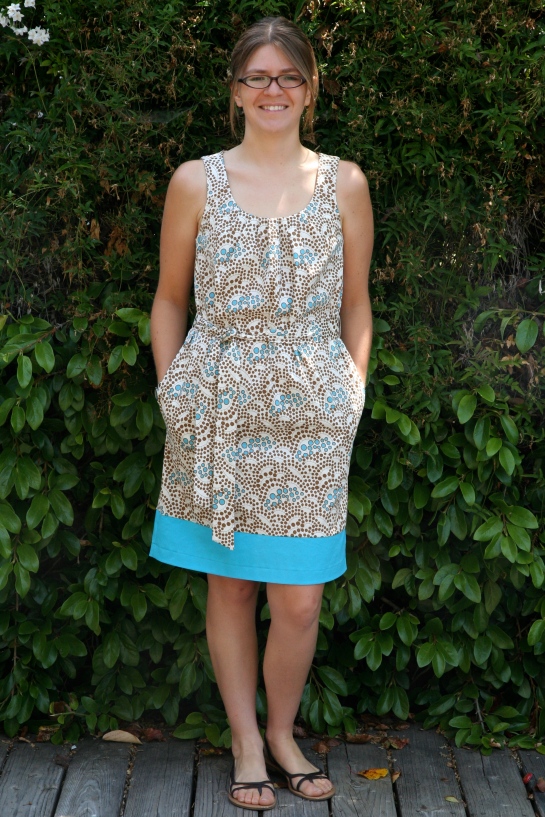 I will say that this pattern is exactly what it seems to be: a blousy sack dress with a nice pleated neckline that absolutely must be belted (I have no photographic proof, but trust me when I say that it looks like a mod 60s nightgown without the sash). I’m not over the moon about this pattern, but it is well drafted and quite easy, which I suppose won it its “best of” status.

Fit-wise, I made a 10 on top grading to a 12 at the hip. The top fits well, and it’s a smidgen tight across my hips/butt but not enough to need to let it out. What I just realised is that in this picture as well as the envelope picture the use of the (huge!) pockets hides the fact that there is so much balloony-outy fabric at the midsection it’s not even funny. The pattern pieces are sightly egg-shaped, so it’s clearly intentional. A little blousing out on top of the belt is great, but there’s too much poofiness in the stomach area for it to be super flattering. Luckily I love pockets and will probably have my hands in them much of the time – problem solved.

The one fit issue I did have was that the back neckline gaped a ton. I’m sure this is because I have the dreaded “round back” or whatever, as I usually taper in at the center back zipper on dresses with high back necklines, but this is the first time I’ve had to take a back neck dart. I actually made an inverted pleat at center back, taking out over an inch! I just made it with the back and back facing together, since I wasn’t about to rip out the facing and pleat it separately. Here’s a picture of the pleat – I think it actually works well as a design feature to compliment the front pleating and the overall blousiness of the dress.

I also obviously added the contrast band at the bottom, since I had the contrast fabric and I thought it could use something to accentuate the mod-ness of the funky print. I actually made up the whole dress at the drafted length first to see how long I wanted it and how big a band that would require, and it turned out that the unhemmed length was just about perfect (take note, this dress is drafted short!). I cut a 6 inch tall strip of blue for the band using the bottom of the front and back patterns (a 4 inch band, 1 1/2 inches for the hem, and 1/2 seam allowance) then I cut 4 inches off the bottom of the dress and sewed on the band. One of my side seams doesn’t match for some reason (actual reason: only 30 minutes until I had to leave for Girls Night), but I don’t tend to care about those sorts of things. I made a machine blind hem. The blue fabric is a bit heavier weight than the fashion fabric, but I think that works to weigh down the skirt a little and keep it from being too floaty.

In the end I’m happy with this dress, and glad this fabric found a home, but I can’t say I was interested in making it outside of the deadlines I set for myself. There are a lot more practical things I could have made instead, but this jumped to the top for, ultimately, pretty thin reasons. I need now to figure out how to motivate myself this much for everything I want/need to make… so, Pattern Review, could you please have a contest for whatever it is I’m interested in making at any given moment? Cool, thanks.

My review (and contest entry, right under the wire) is here.